A few days ago, I released GNOME Tweaks 3.27.4, a development snapshot on the way to the next stable version 3.28 which will be released alongside GNOME 3.28 in March. Here are some highlights of what’s changed since 3.26.

For 3.26, we renamed GNOME Tweak Tool to GNOME Tweaks. It was only a partial rename since many underlying parts still used the gnome-tweak-tool name. For 3.28, we have completed the rename. We have renamed the binary, the source tarball releases, the git repository, the .desktop, and app icons. For upgrade compatibility, the autostart file and helper script for the Suspend on Lid Close inhibitor keeps the old name.

GNOME Tweaks has moved from the classic GNOME Git and Bugzilla to the new GNOME-hosted gitlab.gnome.org. The new hosting includes git hosting, a bug tracker and merge requests. Much of GNOME Core has moved this cycle, and I expect many more projects will move for the 3.30 cycle later this year.

As promised, the Global Dark Theme switch has been removed. Read my previous post for more explanation of why it’s removed and a brief mention of how theme developers should adapt (provide a separate Dark theme!).

The theme chooser has been improved in several small ways. Now that it’s quite possible to have a GNOME desktop without any gtk2 apps, it doesn’t make sense to require that a theme provide a gtk2 version to show up in the theme chooser so that requirement has been dropped.

The theme chooser will no longer show the same theme name multiple times if you have a system-wide installed theme and a theme in your user theme directory with the same name. Additionally, GNOME Tweaks does better at supporting the  XDG_DATA_DIRS standard in case you use custom locations to store your themes or gsettings overrides. 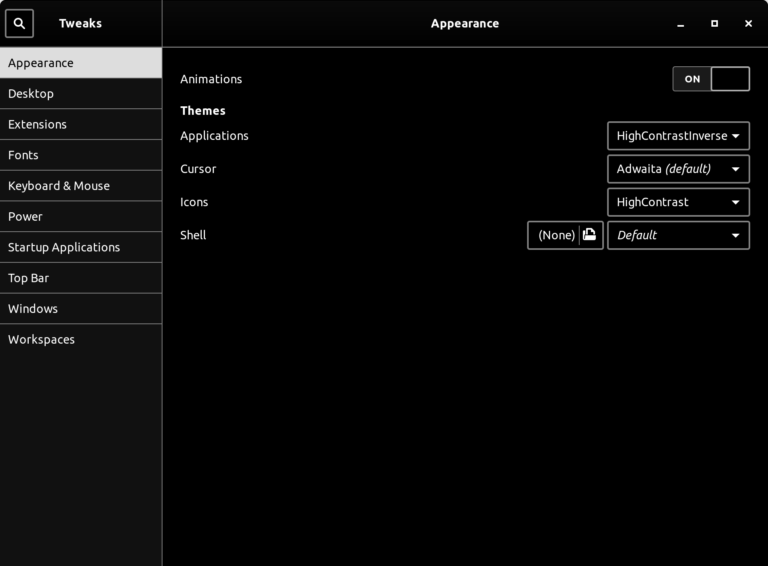 GNOME Tweaks 3.27.4 with the HighContrastInverse theme

Finally, gtk3 still offers a HighContrastInverse theme but most people probably weren’t aware of that since it didn’t show up in Tweaks. It does now! It is much darker than Adwaita Dark.

Several of these theme improvements (including HighContrastInverse) have also been included in 3.26.4.

For more details about what’s changed and who’s done the changing, see the project NEWS file.